These aptly named “theme parks” transport patrons to an alternate time and place, allowing them to walk through familiar fictional lands and escape reality for a precious few hours. And just like any good story, the design of these experiences starts with a “setting.” This is where architecture plays an integral role.

Through a combination of architectural form, materiality and detail, designers set the scene for the “story” the theme park is trying to tell. Architecture is the “once upon a time,” cluing people in on the where, when and what of the story before they arrive at the ride’s gates.

Whether set in bustling New York City or a galaxy far, far away, the first clue to the general location of the “story” is built environment. Just as a man staring up at Big Ben will (most likely) deduce that he has found himself in London, a child looking up at the turrets of Cinderella’s castle will (most likely) know that he or she is in The Magic Kingdom. Theme parks use architecture to tell patrons “YOU ARE HERE.”

While it seems simple enough to design the queue for a ride or a shop to look like a beloved storybook castle, design on a smaller scale can play just as much of a role as the bigger architectural structures. For example: Huts or “treehouse” structures, composed of rough cut wood and rope might suggest a jungle setting (such as in the line for The Tiki Room at Disney’s Magic Kingdom), while concrete, street lights/street signs and faux storefronts might suggest a city setting (such as in the line for Rockin’ Rollercoaster at Disney’s Hollywood Studios.) 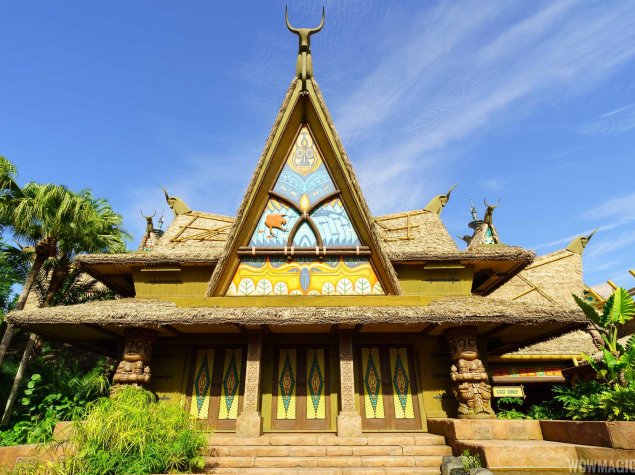 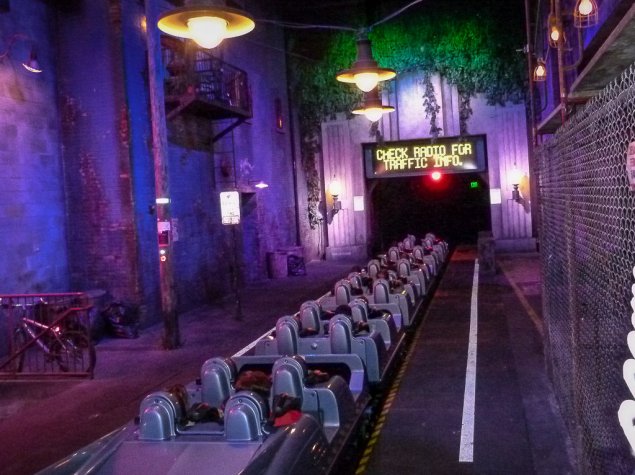 While neither ride queue design features a famous monument or recognizable piece of architecture, they both effectively establish where the “story” takes place (e.g. the jungle, or the city.)

Who needs a DeLorean when you have Architecture?

In order to transport guests into the past or the future, theme park designers utilize architectural style and finishes to help patrons place [ when ] the story around them takes place.

The chromatic palette of metallic surfaces, bright LED lights and clean architectural lines impress upon the patron a sense of “future,” as illustrated in the ride queue for Star Tours in Disney’s Hollywood Studios and Transformers at Universal Studios. 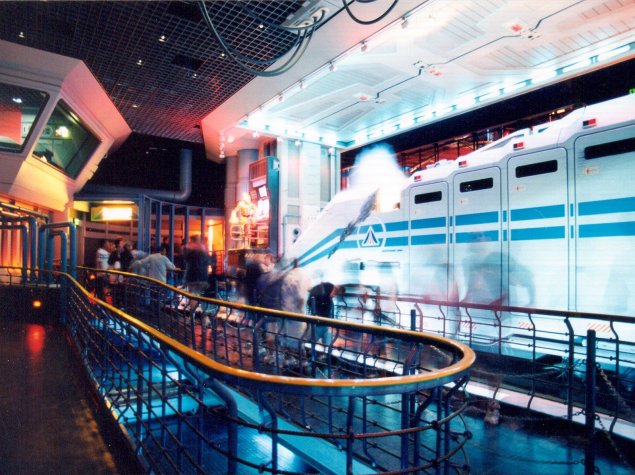 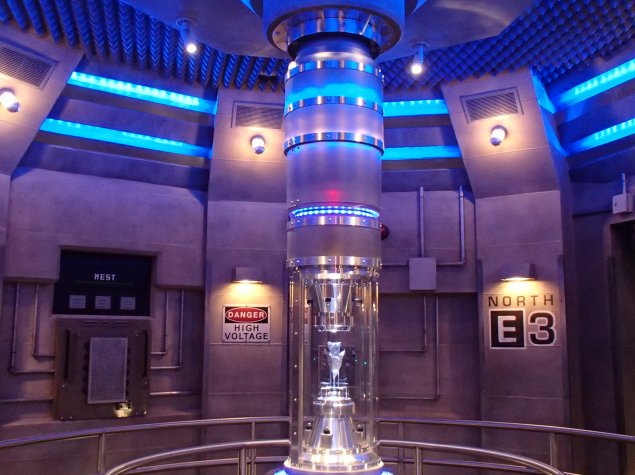 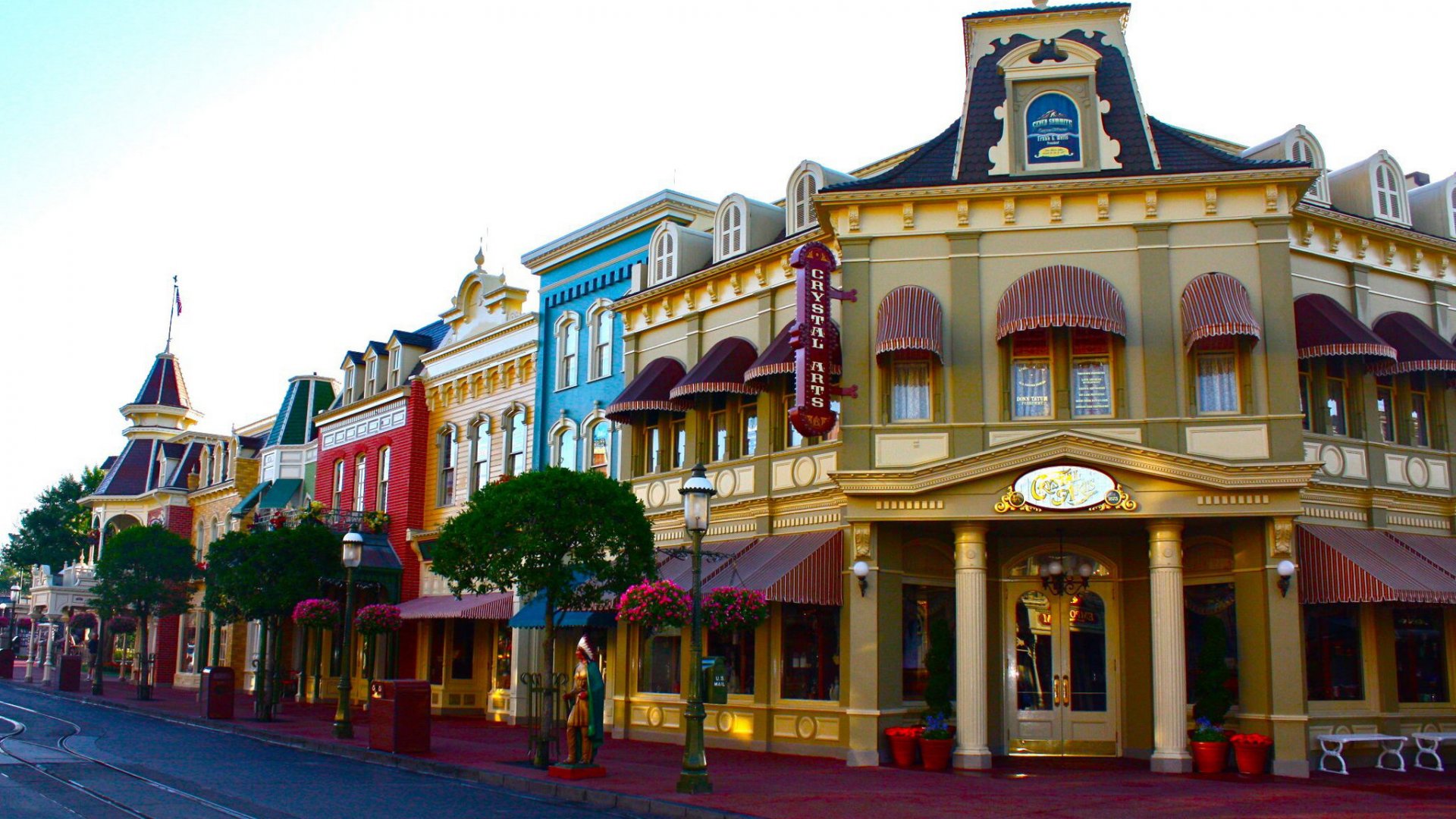 Once [ when ] and [ where ] have been established, design can be used to hint at [ what ] the story might entail. Think of it as architectural foreshadowing, if you will.

It is not enough to say, “okay, we’ll design a 17th century castle to house the ride.” One must consider the story that will unfold inside the walls of the old castle. Is the castle home to Cinderella…or Dracula? Or is it not a home at all, but a school of Wizardry? Is it a place of happiness or horror? Each story is unique, meriting a unique design approach. No one castle would be appropriate for all stories.

Through the use of color palettes, lighting, architectural flourish, furnishings/props and even audio/visual affects, the designer sets the tone of what’s ahead.

Whereas a fancy Hollywood hotel is not inherently thought of as “spooky,” the dim lighting, dark color palette, gothic detailing and faux cobwebs of the Tower of Terror queue prepare the audience for what is certainly a chilling ride ahead. 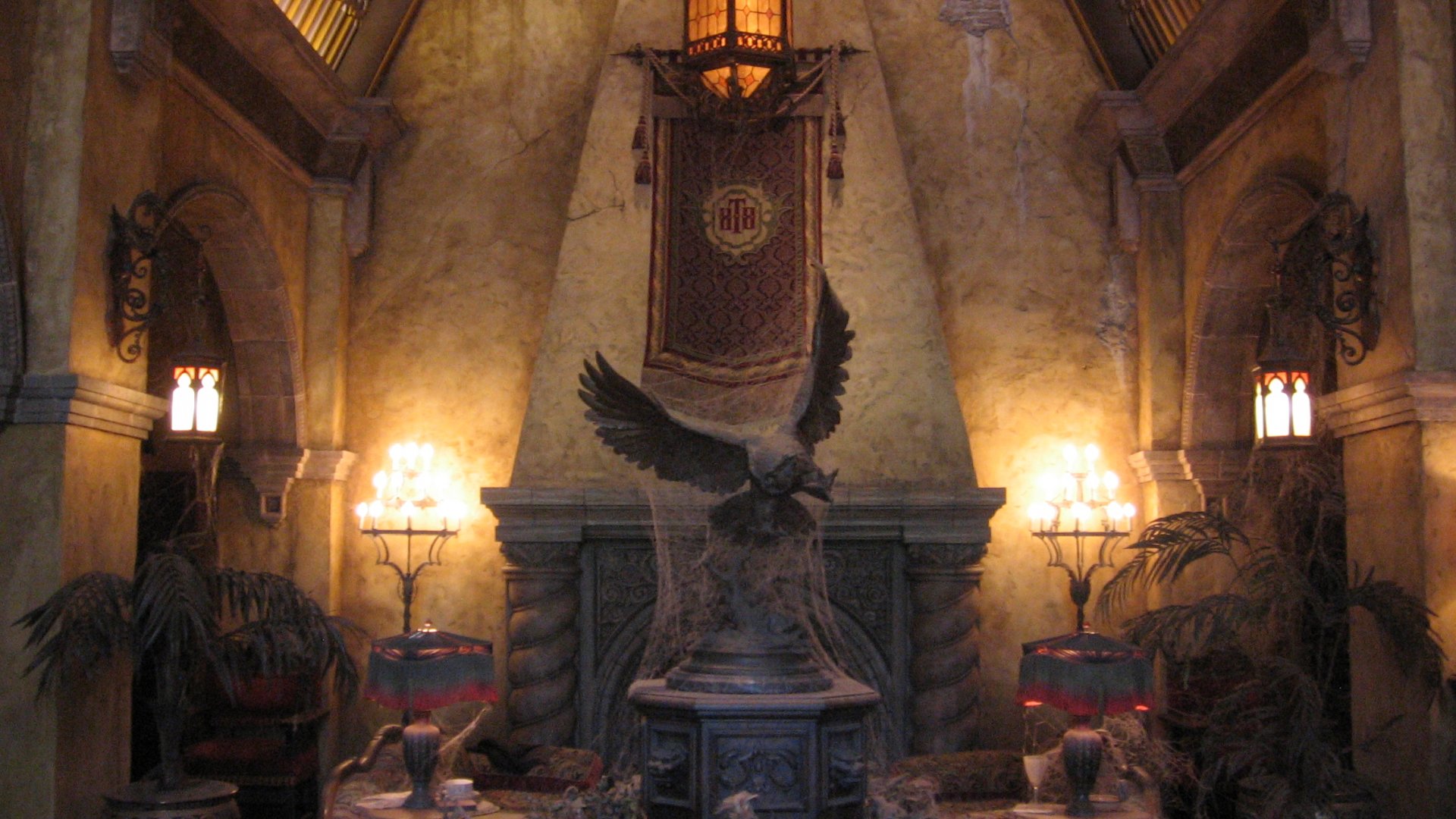 Similarly, the bright lighting, primary color palette and simple, yet whimsical twists and turns of the Toy Story Mania queue instill a sense of childhood delight in the rider before he/she hops onto the ride. 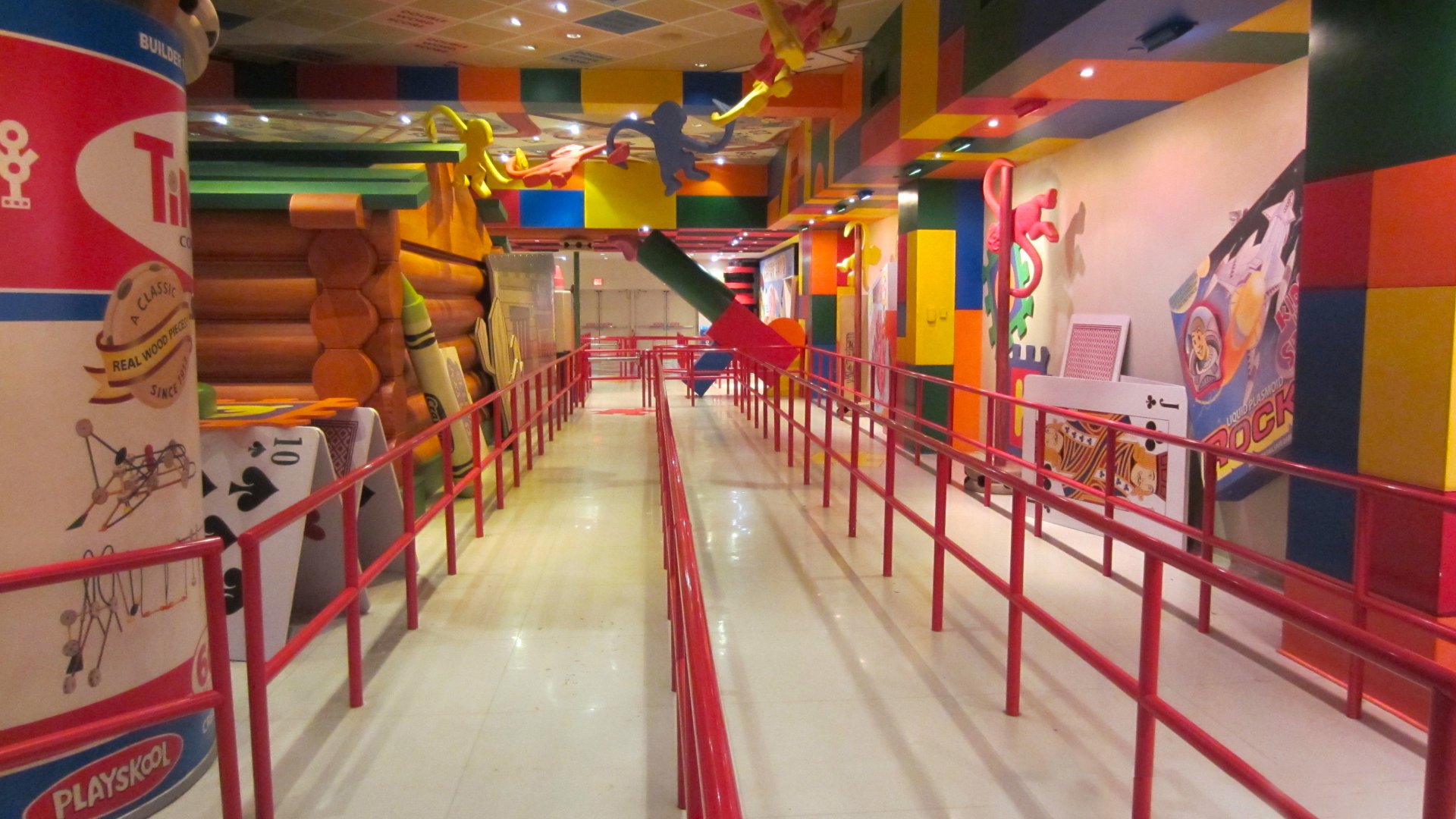 Though some might argue it is the thrill of a rollercoaster alone that draws crowds, it’s my opinion that it is this architectural storytelling that makes certain theme parks so iconic, placing them leagues ahead of their counterparts. Because, after all, without Cinderella’s castle, would the Magic Kingdom really be as magical?

Footnote*
I am aware that many colleagues may criticize theme park design as “inauthentic” architecture. While I am not surprised to hear this, I believe the comment is like comparing grandmas and machine guns (as the Romanian idiom goes.) Theme parks are not selling authenticity, but rather an escape from reality… a fictional story.

To truly immerse oneself in the story being told by these theme parks, one must suspend disbelief at the gate. 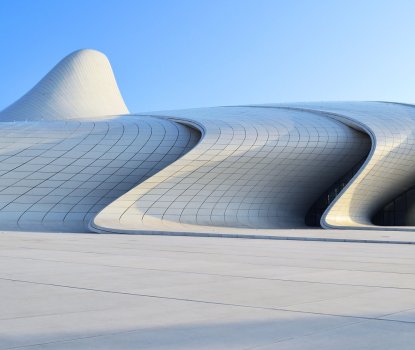 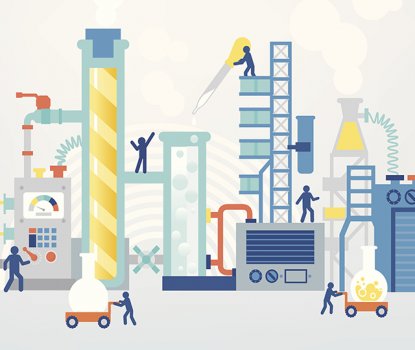 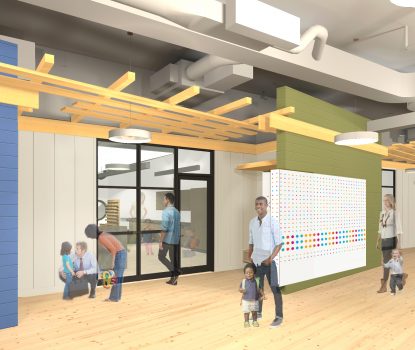